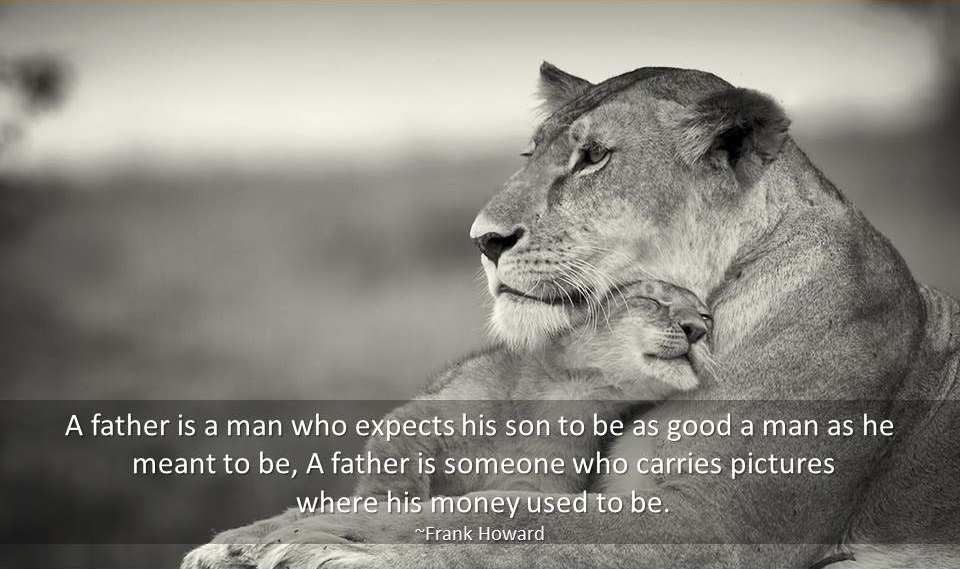 Welcome to Son Quotes. Here you will find famous quotes about sons.

A father is a man who expects his son to be as good a man as he meant to be, A father is someone who carries pictures where his money used to be. ~Frank Howard Clark

A friend of mine took me to Memphis advised me that I should get in the musicians' union. He gave me a set of drums and said, Stay on the job, son. ~Levon Helm

A good father believes that he does wisely to encourage enterprise, productive skill, prudent self-denial, and judicious expenditure on the part of his son. ~William Graham Sumner

A king, realizing his incompetence, can either delegate or abdicate his duties. A father can do neither. If only sons could see the paradox, they would understand the dilemma. ~Marlene Dietrich

A lot of people think Christianity is about always being perfect. It's actually the opposite of that. It's realizing that we're all humans, and that's why God sent his Son to this earth - to save people. ~Billy Ray Cyrus

A man who says that no patriot should attack the war until it is over... is saying no good son should warn his mother of a cliff until she has fallen. ~Gilbert K. Chesterton

A man's desire for a son is usually nothing but the wish to duplicate himself in order that such a remarkable pattern may not be lost to the world. ~Helen Rowland

A son is a son till he takes him a wife, a daughter is a daughter all of her life. ~Author Unknown

After I set out to refute Christianity intellectually and couldn't, I came to the conclusion the Bible was true and Jesus Christ was God's Son. ~Josh McDowell

As a single withered tree, if set aflame, causes a whole forest to burn, so does a rascal son destroy a whole family. ~Chanakya

Be careful to leave your sons well instructed rather than rich, for the hopes of the instructed are better than the wealth of the ignorant. ~Epictetus

Becoming a dad means you have to be a role model for your son and be someone he can look up to. ~Wayne Rooney

Bondage is of the mind; freedom too is of the mind. If you say 'I am a free soul. I am a son of God who can bind me' free you shall be. ~Ramakrishna

Boys are beyond the range of anyone's sure understanding, at least when they are between the ages of 18 months and 90 years. ~James Thurber

Boys will be boys. And even that wouldn't matter if only we could prevent girls from being girls. ~Anne Frank

Build me a son, O Lord, who will be strong enough to know when he is weak, and brave enough to face himself when he is afraid, one who will be proud and unbending in honest defeat, and humble and gentle in victory. ~Douglas MacArthur

By the time a man realizes that maybe his father was right, he usually has a son who thinks he's wrong. ~Charles Wadsworth

Don't hold your parents up to contempt. After all, you are their son, and it is just possible that you may take after them. ~Evelyn Waugh

Don't wait to make your son a great man - make him a great boy. ~Author Unknown

Every man is the son of his own works. ~Miguel de Cervantes

Every mother hopes that her daughter will marry a better man than she did, and is convinced that her son will never find a wife as good as his father did. ~Martin Andersen-Nexö

Every son quotes his father, in words and in deeds. ~Terri Guillemets

Father was the eldest son and the heir apparent, and he set the standard for being a Rockefeller very high, so every achievement was taken for granted and perfection was the norm. ~David Rockefeller

Fathers and sons are much more considerate of one another than mothers and daughters. ~Friedrich Nietzsche

For God so loved the World that he gave his only Son, that whoever believes in him should not perish but have eternal life. ~Jesus Christ

Forgive, son; men are men; they needs must err. ~Euripides

Giving your son a skill is better than giving him one thousand pieces of gold. ~Chinese Proverb

Go miser go, for money sell your soul. Trade wares for wares and trudge from pole to pole, So others may say when you are dead and gone. See what a vast estate he left his son. ~John Dryden

God had one son on earth without sin, but never one without suffering. ~Saint Augustine

Happy is the son whose faith in his mother remains unchallenged. ~Louisa May Alcott

He followed in his father's footsteps, but his gait was somewhat erratic. ~Nicolas Bentley

He who can be a good son will be a good father. ~Author Unknown

Hugh Lynn Cayce, Edgar Cayce's son, is quoted as saying, The best interpretation of a dream is one you apply. ~Henry Reed

I am truly my mother's son. ~David Geffen

I believe in God and his son, Jesus. ~Lil Wayne

I can only hope to be 10 percent of the mom mine was to me. She encouraged me to be confident and enjoy life. That's what I want for my son. ~Charlize Theron

I did want to acknowledge and confirm the fact that my son does, indeed, have an autism diagnosis. ~Jenny McCarthy

I love my son and am proud of my son. ~Robert H. Schuller

I must study politics and war that my sons may have liberty to study mathematics and philosophy.... ~John Adams

I think Romeo and Juliet is uplifting. That's how much a son wishes to avenge his father. That is how much two young people can love each other. ~Ben Kingsley

If a man has been his mother's undisputed darling he retains throughout life the triumphant feeling, the confidence in success, which not seldom brings actual success along with it. ~Sigmund Freud

If the relationship of father to son could really be reduced to biology, the whole earth would blaze with the glory of fathers and sons. ~James A. Baldwin

If they had a social gospel in the days of the prodigal son, somebody would have given him a bed and a sandwich and he never would have gone home. ~Vance Havner

If you can keep your wits about you while all others are losing theirs, and blaming you. The world will be yours and everything in it, what's more, you'll be a man, my son. ~Rudyard Kipling

I'm not an analyzer. I've got a son that analyzes everything and everybody. But I don't analyze people. ~Billy Graham

It is funny the two things most men are proudest of is the thing that any man can do and doing does in the same way, that is being drunk and being the father of their son. ~Gertrude Stein

It is not flesh and blood, but heart which makes us fathers and sons. ~Friedrich von Schiller

It was on my fifth birthday that Papa put his hand on my shoulder and said, 'Remember, my son, if you ever need a helping hand, you'll find one at the end of your arm.' ~Sam Levenson

It's about avoiding reality through various escape routes that become addictions and lead to Hell. My character is addicted to television, chocolate, coffee, to her dream of her son, which has no basis in reality. ~Ellen Burstyn

I've started looking at my own father a bit funny. He assures me, though, that I really am the son of a Scottish postman. ~Craig Ferguson

Let France have good mothers, and she will have good sons. ~Napoleon Bonaparte

My number one goal is to love, support and be there for my son. ~Farrah Fawcett

My son complains about headaches. I tell him all the time, when you get out of bed, it's feet first! ~Henny Youngman

My son is now an 'entrepreneur.' That's what you're called when you don't have a job. ~Ted Turner

Never fret for an only son, the idea of failure will never occur to him. ~George Bernard Shaw

No one would be foolish enough to choose war over peace - in peace sons bury their fathers, but in war fathers bury their sons. ~Croesus of Lydia

Of all the animals, the boy is the most unmanageable. ~Plato

Oh, there's all these rumors that I'm a lesbian. I have a boyfriend now, Brandon Blackstock; my manager Narvel's son, Reba McEntire's stepson. ~Kelly Clarkson

One father is enough to govern one hundred sons, but not a hundred sons one father. ~George Herbert

Racism isn't born, folks, it's taught. I have a two-year-old son. You know what he hates? Naps! End of list. ~Denis Leary

Son, we'd like to keep you around this season but we're going to try and win a pennant. ~ Casey Stengel

Son, you outgrew my lap, but never my heart. ~Author Unknown

Sons have always a rebellious wish to be disillusioned by that which charmed their fathers. ~Aldous Huxley

Thank the Lord for using each person as a tool in your life to deepen your insight into His grace and conforming you to the image of His Son. ~Charles Stanley

That strong mother doesn't tell her cub, Son, stay weak so the wolves can get you. She says, Toughen up, this is reality we are living in. ~Lauryn Hill

The father is always a Republican toward his son, and his mother's always a Democrat. ~Robert Frost

The first step, my son, which one makes in the world, is the one on which depends the rest of our days. ~Voltaire

The monarchy that I hand over to my son is not going to be the same one that I have inherited. ~King Abdullah II

The powerful men in my life have always believed in me: my husband, my son. ~Judy Collins

The sooner you treat your son as a man, the sooner he will be one. ~John Dryden

The story of Jesus makes no sense to me. God sent his only son. Why could God only have one son and why would he have to die? It's just bad writing, really. And it's really terrible in about the second

There's no political point worth my son's life. ~Joe Biden

We have defeated Jim Crow, but now we have to deal with his son, James Crow Jr., esquire. ~Al Sharpton

We think our fathers fools, so wise we grow. Our wiser sons, no doubt will think us so. ~Alexander Pope

We've begun to raise daughters more like sons... but few have the courage to raise our sons more like our daughters. ~Gloria Steinem

What I did was take the Jesus of the Gospels, the Son of God, the Son of the Virgin Mary, and sought to make Him utterly believable, a vital breathing character. ~Anne Rice

What was silent in the father speaks in the son, and often I found in the son the unveiled secret of the father. ~Friedrich Nietzsche

When I auditioned for my high school band the band director was excited because my father was known to be a great musician. When he heard me, he said 'Are you sure you're Ellis's son?' ~Wynton Marsalis

When I first went public with my son Evan's story, I just planned to talk about the 'R' word - Recovery. But soon I was spending most my time talking about the 'V' word - vaccines. ~Jenny McCarthy

You are my sonshine. ~Author Unknown

You must be afraid, my son. That is how one becomes an honest citizen. ~Jean-Paul Sartre

Your children are not your children. They are the sons and daughters of Life's longing for itself. ~Kahlil Gibran

Your son at five is your master, at ten your slave, at fifteen your double, and after that, your friend or your foe, depending on his bringing up. ~Author Unknown

From Son Quotes to Quote of the Day