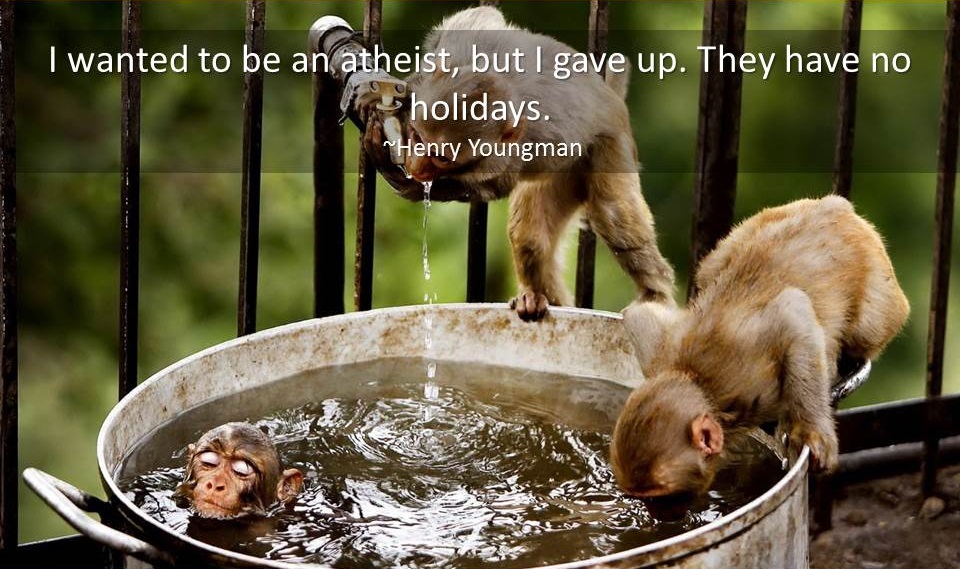 Welcome to Funny Quotes. Here you will find famous quotes and humorous quotations.

Every fight is a food fight when you’re a cannibal. ~Demetri Martin

I wanted to be an atheist, but I gave up. They have no holidays. ~Henry Youngman

Some cause happiness wherever they go; others, whenever they go. ~Oscar Wilde

You can tell a lot about a fellow’s character by the way he eats jelly beans. ~Ronald Reagan

A psychiatrist is a fellow who asks you a lot of expensive questions your wife asks for nothing. ~Joey Adams

Let us live so that when we come to die even the undertaker will be sorry. ~Mark Twain

Insanity: doing the same thing over and over again and expecting different results. ~Albert Einstein

All the men in my family were bearded and most of the women. ~W. C. Fields

I had a dream last night; I was eating a ten pound marshmallow. I woke up this morning and the pillow was gone. ~Tommy Cooper

When you become senile, you won’t know it. ~Bill Cosby

A fanatic is one who can’t change his mind and won’t change the subject. ~Winston Churchill

I am an expert of electricity. My father occupied the chair of applied electricity at the state prison. ~W. C. Fields

The difference between genius and stupidity is that genius has its limits. ~Albert Einstein

I guess the real reason that my wife and I had children is the same reason that Napoleon had for invading Russia: it seemed like a good idea at the time. ~Bill Cosby

The easiest job in the world has to be coroner. Surgery on dead people. What’s the worst thing that could happen? If everything went wrong, maybe you’d get a pulse. ~Dennis Miller

I’ve kissed so many women I can do it with my eyes closed. ~Henry Youngman

You’re fooling yourself if you argue with a fool – others may not know the difference. ~Robert Paul

A banker is a fellow who lends you his umbrella when the sun is shining and wants it back the minute it begins to rain. ~Mark Twain

I’ve been in love with the same woman for forty-one years. If my wife finds out,she’ll kill me. ~Henry Youngman

When people ask me if I have any spare change, I tell them I have it at home in my spare wallet. ~Nick Arnette

I never hated a man enough to give him his diamonds back.~Zsa Zsa Gabor

I like pigs. Dogs look up to us. Cats look down on us. Pigs treat us as equals. ~Winston Churchill

Don’t take life too seriously; you’ll never get out of it alive. ~Elbert Hubbard

Always and never are two words you should always remember never to use. ~Wendell Johnson

I never know what I think about something until I read what I’ve written on it. ~William Faulkner

Human beings are the only creatures on earth that allow their children to come back home. ~Bill Cosby

When I was fourteen, my father was so ignorant I could hardly stand to have him around. When I got to be twenty-one, I was astonished at how much the old man had learned in seven years. ~Josh Billings

Don’t worry about the world coming to an end today. It is already tomorrow in Australia. ~Charles Schulz

From Funny Quotes to Quote of the Day