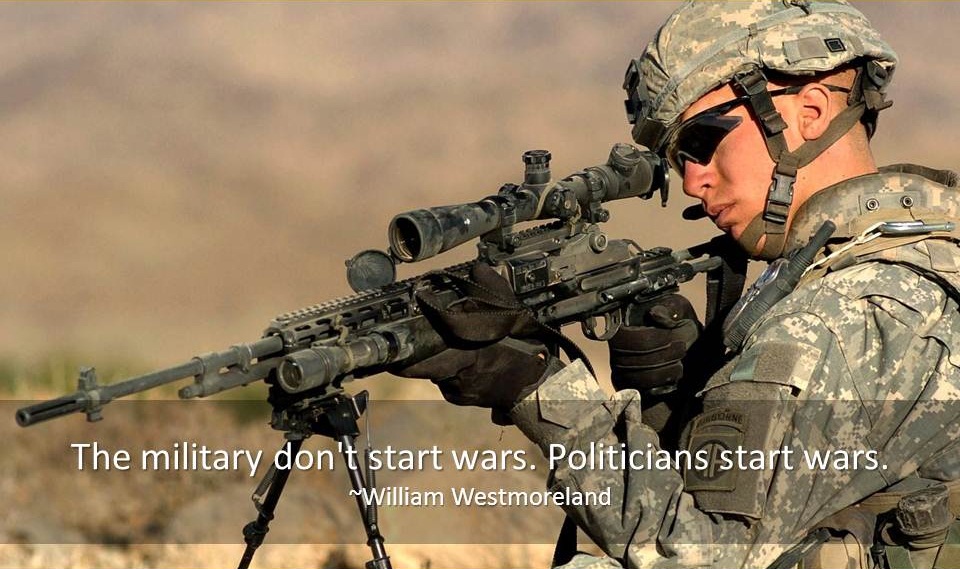 Welcome to Military Quotes. Here you will find famous quotes and quotations about the military life.

Military intelligence is a contradiction in terms. ~Groucho Marx

Military justice is to justice what military music is to music. ~Groucho Marx

Most of my young years were spent under the boots of the military. ~Paulo Coelho

I'm inclined to think that a military background wouldn't hurt anyone. ~William Faulkner

The spirit of this country is totally adverse to a large military force. ~Thomas Jefferson

I will insist on a military so powerful no one would ever think of challenging it. ~Mitt Romney

A piece of spaghetti or a military unit can only be led from the front end. ~George S. Patton

The main reason for the armed resistance is the American military presence. ~Muqtada al Sadr

Most people associate command and control leadership with the military. ~Margaret J. Wheatley

The basic problems facing the world today are not susceptible to a military solution. ~John F. Kennedy

A major power can afford a military debacle only when it looks like a political victory. ~Friedrich Durrenmatt

We don't thrive on military acts. We do them because we have to, and thank God we are efficient. ~Golda Meir

If the American military begins to withdrawal, there will be no need for these armed groups. ~Muqtada al Sadr

You don't have to be straight to be in the military; you just have to be able to shoot straight. ~Barry Goldwater

Putting women in military combat is the cutting edge of the feminist goal to force us into an androgynous society. ~Phyllis Schlafly

I would sincerely regret, and which never shall happen whilst I am in office, a military guard around the President. ~Andrew Jackson

I have against me the bourgeois, the military and the diplomats, and for me, only the people who take the Metro. ~Charles de Gaulle

I'm just very wary that once you start military operations in any country, it's very difficult to predict what the outcome is. ~King Abdullah II

My hope is that gays will be running the world, because then there would be no war. Just a greater emphasis on military apparel. ~Roseanne Barr

We're in greater danger today than we were the day after Pearl Harbor. Our military is absolutely incapable of defending this country. ~Ronald Reagan

When I retired out of the military, I registered myself as a Republican because my views and perspectives were more in line with that party. ~Allen West

I think I understand what military fame is; to be killed on the field of battle and have your name misspelled in the newspapers. ~William Tecumseh Sherman

My mental faculties remained in suspended animation while I obeyed the orders of the higher-ups. This is typical with everyone in the military. ~Smedley Butler

Ronald Reagan was a president of strength. His philosophy was a philosophy of strength - a strong military, a strong economy and strong families. ~Mitt Romney

We will strengthen our security by building missile defense, restoring our military might, and standing by and strengthening our intelligence officers. ~Mitt Romney

If you look at military and intelligence positions from the 1950s, the Israeli-Palestinian conflict has always been against American national interests. ~King Abdullah II

A nation that continues year after year to spend more money on military defense than on programs of social uplift is approaching spiritual doom. ~Martin Luther King, Jr.

On the battlefield, the military pledges to leave no soldier behind. As a nation, let it be our pledge that when they return home, we leave no veteran behind. ~Dan Lipinski

It's not just a matter of whether you support Obama or Romney. It's who they have coming with them. I always keep my powder dry, as they say in the military. ~Colin Powell

So while I will never minimize the costs involved in military action, I am convinced that a failure to act in Libya would have carried a far greater price for America. ~Barack Obama

Over grown military establishments are under any form of government inauspicious to liberty, and are to be regarded as particularly hostile to republican liberty. ~George Washington

Mistakes, after all, are endemic to foreign and military policy given the unpredictability of events and the difficulty of securing reliable information in a place like Iraq. ~Eric Alterman

Successful organizations, including the Military, have learned that the higher the risk, the more necessary it is to engage everyone's commitment and intelligence. ~Margaret J. Wheatley

For good or for ill, air mastery is today the supreme expression of military power and fleets and armies, however vital and important, must accept a subordinate rank. ~Winston Churchill

When there's a status quo, usually what shakes everybody up is some sort of military confrontation, at which point we all come running and screaming to pick up the pieces. ~King Abdullah II

The plan was criticized by some retired military officers embedded in TV studios. But with every advance by our coalition forces, the wisdom of that plan becomes more apparent. ~Dick Cheney

And like the old soldier in that ballad, I now close my military career and just fade away, an old soldier who tried to do his duty as God gave him the sight to see that duty. ~Douglas MacArthur

For me, it was kind of like going into the military or something. And anybody - any male - who has ever worked in a French kitchen knows what I am talking about when I say that. ~Alton Brown

Like the old soldier of the ballad, I now close my military career and just fade away, an old soldier who tried to do his duty as God gave him the light to see that duty. Goodbye. ~Douglas MacArthur

War should be the only study of a prince. He should consider peace only as a breathing-time, which gives him leisure to contrive, and furnishes as ability to execute, military plans. ~Niccolo Machiavelli

I look forward to a great future for America - a future in which our country will match its military strength with our moral restraint, its wealth with our wisdom, its power with our purpose. ~John F. Kennedy

Of course, for me, having served 22 years in the military and to have the opportunity to continue to serve my country is a great honor and is a privilege. So that's what makes it special each and every day. ~Allen West

The consequences of President Johnson's campaign of deliberate deception regarding Vietnam could hardly have been more catastrophic for the nation, the military, the president, his party, and the presidency itself. ~Eric Alterman

The worth of a civilization or a culture is not valued in the terms of its material wealth or military power, but by the quality and achievements of its representative individuals - its philosophers, its poets and its artists. ~Herbert Read

After a shooting spree, they always want to take the guns away from the people who didn't do it. I sure as hell wouldn't want to live in a society where the only people allowed guns are the police and the military. ~William S. Burroughs

If we have reason to believe someone is preparing an attack against the U.S., has developed that capability, harbours those aspirations, then I think the U.S. is justified in dealing with that, if necessary, by military force. ~Dick Cheney

We must never forget why we have, and why we need our military. Our armed forces exist solely to ensure our nation is safe, so that each and every one of us can sleep soundly at night, knowing we have 'guardians at the gate.'~Allen West

We cannot continue to rely only on our military in order to achieve the national security objectives that we've set. We've got to have a civilian national security force that's just as powerful, just as strong, just as well-funded. ~Barack Obama

All soldiers who serve their country and put their lives at risk need to know that if something happens to them, their families will be well taken care of. That's the bond we have with our military men and women and their families. ~Jeff Sessions

I'm pretty actively involved with the military because I think they're incredible human beings. If I can give back to them for what they're doing for us, it's a good thing. And I think to have happy soldiers, you need to feed them well. ~Emeril Lagasse

Well, I think, you know, the arts are really what - one of the things that make this country strong. We always think it's our economy or our military power, but in fact, I think it's our culture, our civilization, our ideas, our creativity. ~Caroline Kennedy

I feel impelled to speak today in a language that in a sense is new-one which I, who have spent so much of my life in the military profession, would have preferred never to use. That new language is the language of atomic warfare. ~Dwight D. Eisenhower

The War on Drugs employs millions - politicians, bureaucrats, policemen, and now the military - that probably couldn't find a place for their dubious talents in a free market, unless they were to sell pencils from a tin cup on street corners. ~L. Neil Smith

President Kennedy was willing to go to war. He was not a coward. The man had been in war and so had Ken O'Donnell. He was ready to protect this nation, but he was not ready for a military solution just because it was being rammed down his throat. ~Kevin Costner

Operations in Iraq and Afghanistan and the war on terrorism have reduced the pace of military transformation and have revealed our lack of preparation for defensive and stability operations. This Administration has overextended our military. ~Barack Obama.

I started to make a study of the art of war and revolution and, whilst abroad, underwent a course in military training. If there was to be guerrilla warfare, I wanted to be able to stand and fight with my people and to share the hazards of war with them. ~Nelson Mandela

Tonight, we gather to affirm the greatness of our nation - not because of the height of our skyscrapers, or the power of our military, or the size of our economy. Our pride is based on a very simple premise, summed up in a declaration made over two hundred years ago. ~Barack Obama

All the armies of Europe, Asia and Africa combined, with all the treasure of the earth (our own excepted) in their military chest; with a Buonaparte for a commander, could not by force, take a drink from the Ohio, or make a track on the Blue Ridge, in a trial of a thousand years. ~Abraham Lincoln

In the 20th century, the United States endured two world wars and other traumatic and expensive military conflicts; the Depression; a dozen or so recessions and financial panics; oil shocks; a flu epidemic; and the resignation of a disgraced president. Yet the Dow rose from 66 to 11,497. ~Warren Buffett

When you decide to get involved in a military operation in a place like Syria, you've got to be prepared, as we learned from Iraq and Afghanistan, to become the government, and I'm not sure any country, either the United States or I don't hear of anyone else, who's willing to take on that responsibility. ~Colin Powell

Of course, there is no question that Libya - and the world - will be better off with Gaddafi out of power. I, along with many other world leaders, have embraced that goal, and will actively pursue it through non-military means. But broadening our military mission to include regime change would be a mistake. ~Barack Obama

From Military Quotes to Quote of the Day