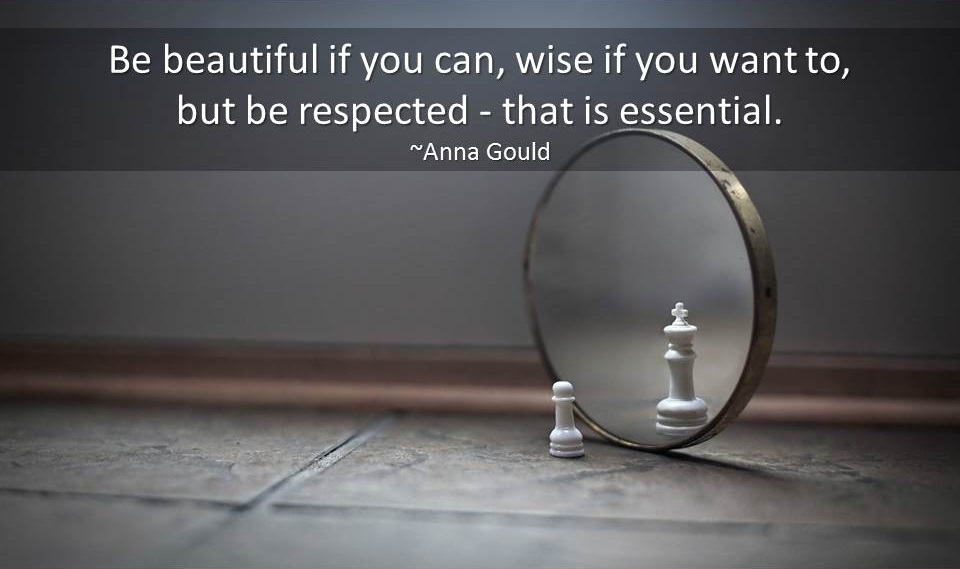 Welcome to Worry Quotes. Here you will find famous quotes about self respect.

A man can stand a lot as long as he can stand himself. ~Axel Munthe

A man who doesn't trust himself can never really trust anyone else. ~Cardinal De Retz

Be beautiful if you can, wise if you want to, but be respected - that is essential. ~Anna Gould

Drugs are a waste of time. They destroy your memory and your self-respect and everything that goes along with with your self-esteem. They're no good at all. ~Kurt Cobain

Even Catholic parishes today are not wanting for talent. But no serious singer or organist will get anywhere near the typical music program, at least if he wants to retain his self-respect. ~Richard Morris

Everyone in society should be a role model, not only for their own self-respect, but for respect from others. ~Barry Bonds

He that respects himself is safe from others; he wears a coat of mail that none can pierce. ~Henry Wadsworth Longfellow

I care not so much what I am to others as what I am to myself. I will be rich by myself, and not by borrowing. ~Michel de Montaigne

I have no right, by anything I do or say, to demean a human being in his own eyes. What matters is not what I think of him; it is what he thinks of himself. To undermine a man's self-respect is a sin. ~Antoine de Saint-Exupery

I never work just to work. It's some combination of laziness and self-respect. ~Harold Ramis

I prefer to be true to myself, even at the hazard of incurring the ridicule of others, rather than to be false, and to incur my own abhorrence. ~Frederick Douglass

I should have forfeited my own self-respect, and perhaps the good opinion of my countrymen, if I had failed to resent such an injury by calling the offender in question to a personal account. ~Preston Brooks

If I despised myself, it would be no compensation if everyone saluted me, and if I respect myself, it does not trouble me if others hold me lightly. ~Max Nordau

If we lose love and self respect for each other, this is how we finally die. ~Maya Angelou

If you want to be respected by others the great thing is to respect yourself. Only by that, only by self-respect will you compel others to respect you. ~Fyodor Dostoyevsky

In a drama of the highest order there is little food for censure or hatred; it teaches rather self-knowledge and self-respect. ~Percy Bysshe Shelley

In my day, we didn't have self-esteem, we had self-respect, and no more of it than we had earned. ~Jane Haddam

In order to preserve your self-respect, it is sometimes necessary to lie and cheat. ~Robert Byrne

It is not the money but the self-respect and wanting to create good music. ~Barry Gibb

It is the highest form of self-respect to admit our errors and mistakes and make amends for them. To make a mistake is only an error in judgment, but to adhere to it when it is discovered shows infirmity of character. ~Dale Turner

Nationalist pride, like other variants of pride, can be a substitute for self-respect. ~Eric Hoffer

Never esteem anything as of advantage to you that will make you break your word or lose your self-respect. ~Marcus Aurelius

Never violate the sacredness of your individual self-respect. ~Theodore Parker

No man who is occupied in doing a very difficult thing, and doing it very well, ever loses his self-respect. ~George Bernard Shaw

Perhaps the surest test of an individual's integrity is his refusal to do or say anything that would damage his self-respect. ~Thomas S. Monson

Punishment may make us obey the orders we are given, but at best it will only teach an obedience to authority, not a self-control which enhances our self-respect. ~Bruno Bettelheim

Respect your efforts, respect yourself. Self-respect leads to self-discipline. When you have both firmly under your belt, that's real power. ~Clint Eastwood

Respect yourself and others will respect you. ~Confucius

Respecting yourself means listening to your body and emotions continuously. Then acting beyond a linear logic to achieve ones goals. ~Author Unknown

Self-respect is a question of recognizing that anything worth having has a price. ~Joan Didion

Self-respect is nothing to hide behind. When you need it most it isn't there. ~May Sarton

Self-respect is the cornerstone of all virtue. ~John Herschel

Self-respect is the fruit of discipline; the sense of dignity grows with the ability to say no to oneself. ~Abraham Joshua Heschel

Self-respect permeates every aspect of your life. ~Joe Clark

Self-respect: the secure feeling that no one, as yet, is suspicious. ~H. L. Mencken

Some people have so much respect for their superiors they have none left for themselves. ~Peter McArthur

The fact is, if a young man is naturally indolent, the spur of necessity will drive him but a very little way, while the having enough to live upon is often the means of preserving his self-respect. ~James Payn

The great thing in the world is not so much to seek happiness as to earn peace and self-respect. ~Thomas Huxley

The willingness to accept responsibility for one's own life is the source from which self-respect springs. ~Joan Didion

The wish to lead out one's lover must be a tribal feeling; the wish to be seen as loved is part of one's self-respect. ~Elizabeth Bowen

There are other measures of self-respect for a man, than the number of clean shirts he puts on every day. ~Ralph Waldo Emerson

They cannot take away our self-respect if we do not give it to them. ~Mahatma Gandhi

To free us from the expectations of others, to give us back to ourselves - there lies the great, singular power of self-respect. ~Joan Didion

When you know that you can overcome challenges, you do gain that self-respect, and then you won't end up in a situation that you regret later on. ~Danica McKellar

You do not need to be the designated driver of someone's intoxicated ego. ~Dodinsky

You punch me, I punch back. I do not believe it's good for ones self-respect to be a punching bag. ~Edward Koch

From Self Respect Quotes to Quote of the Day