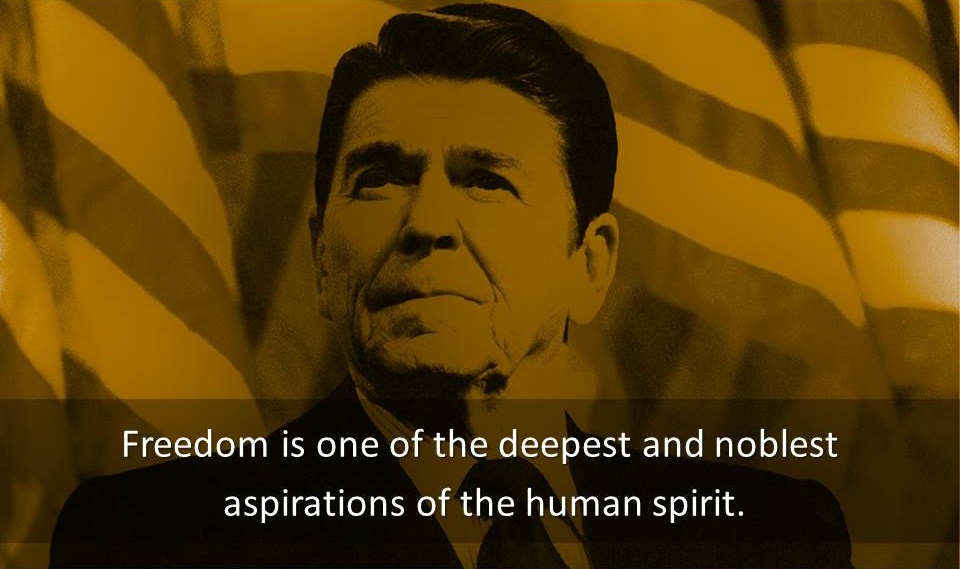 Welcome to Brother Quotes. Here you will find famous quotes and quotations about brothers.

That what is right will always eventually triumph.

We are never defeated unless we give up on God.

Government does not solve problems; it subsidizes them.

We can't help everyone, but everyone can help someone.

We have the duty to protect the life of an unborn child.

Without God, democracy will not and cannot long endure.

Don't be afraid to see what you see.

How can a president not be an actor?

Life is one grand, sweet song, so start the music.

Man is not free unless government is limited.

A people free to choose will always choose peace.

A tree's a tree. How many more do you need to look at?

Abortion is advocated only by persons who have themselves been born.

Freedom is one of the deepest and noblest aspirations of the human spirit.

Going to college offered me the chance to play football for four more years.

Concentrated power has always been the enemy of liberty.

Status quo, you know, is Latin for 'the mess we're in'.

I never drink coffee at lunch. I find it keeps me awake for the afternoon.

Within the covers of the Bible are the answers for all the problems men face.

It's true hard work never killed anybody, but I figure, why take the chance?

Heroes may not be braver than anyone else. They're just braver five minutes longer.

Welfare's purpose should be to eliminate, as far as possible, the need for its own existence.

If you're afraid of the future, then get out of the way, stand aside. The people of this country are ready to move again.

I know in my heart that man is good. That what is right will always eventually triumph. And there's purpose and worth to each and every life.

The thought of being President frightens me and I do not think I want the job. But there are advantages to being elected President. The day after I was elected, I had my high school grades classified Top Secret.

Above all, we must realize that no arsenal, or no weapon in the arsenals of the world, is so formidable as the will and moral courage of free men and women. It is a weapon our adversaries in today's world do not have.

All great change in America begins at the dinner table.

All the waste in a year from a nuclear power plant can be stored under a desk.

Before I refuse to take your questions, I have an opening statement.

Coersion, after all, merely captures man. Freedom captivates him.

Democracy is worth dying for, because it's the most deeply honorable form of government ever devised by man.

Each generation goes further than the generation preceding it because it stands on the shoulders of that generation. You will have opportunities beyond anything we've ever known.

Entrepreneurs and their small enterprises are responsible for almost all the economic growth in the United States.

Freedom prospers when religion is vibrant and the rule of law under God is acknowledged.

Government always finds a need for whatever money it gets.

Government is like a baby. An alimentary canal with a big appetite at one end and no sense of responsibility at the other.

Government's first duty is to protect the people, not run their lives.

Governments tend not to solve problems, only to rearrange them.

Government's view of the economy could be summed up in a few short phrases: If it moves, tax it. If it keeps moving, regulate it. And if it stops moving, subsidize it.

I am not worried about the deficit. It is big enough to take care of itself.

I call upon the scientific community in our country, those who gave us nuclear weapons, to turn their great talents now to the cause of mankind and world peace: to give us the means of rendering these nuclear weapons impotent and obsolete.

I don't believe in a government that protects us from ourselves.

I have left orders to be awakened at any time in case of national emergency, even if I'm in a cabinet meeting.

Inflation is as violent as a mugger, as frightening as an armed robber and as deadly as a hit man.

Information is the oxygen of the modern age. It seeps through the walls topped by barbed wire, it wafts across the electrified borders.

It doesn't do good to open doors for someone who doesn't have the price to get in. If he has the price, he may not need the laws. There is no law saying the Negro has to live in Harlem or Watts.

It has been said that politics is the second oldest profession. I have learned that it bears a striking resemblance to the first.

It's difficult to believe that people are still starving in this country because food isn't available.

It's silly talking about how many years we will have to spend in the jungles of Vietnam when we could pave the whole country and put parking stripes on it and still be home by Christmas.

I've never been able to understand why a Republican contributor is a 'fat cat' and a Democratic contributor of the same amount of money is a 'public-spirited philanthropist'.

I've often said there's nothing better for the inside of a man than the outside of a horse.

Let us be sure that those who come after will say of us in our time, that in our time we did everything that could be done. We finished the race; we kept them free; we kept the faith.

Let us not forget who we are. Drug abuse is a repudiation of everything America is.

My fellow Americans, I am pleased to tell you I just signed legislation which outlaws Russia forever. The bombing begins in five minutes.

My philosophy of life is that if we make up our mind what we are going to make of our lives, then work hard toward that goal, we never lose - somehow we win out.

No arsenal ... is so formidable as the will and moral courage of free men and women.

No government ever voluntarily reduces itself in size. Government programs, once launched, never disappear. Actually, a government bureau is the nearest thing to eternal life we'll ever see on this earth!

No mother would ever willingly sacrifice her sons for territorial gain, for economic advantage, for ideology.

One way to make sure crime doesn't pay would be to let the government run it.

Peace is not absence of conflict, it is the ability to handle conflict by peaceful means.

Politics I supposed to be the second-oldest profession. I have come to realize that it bears a very close resemblance to the first.

Politics is not a bad profession. If you succeed there are many rewards, if you disgrace yourself you can always write a book.

Protecting the rights of even the least individual among us is basically the only excuse the government has for even existing.

Surround yourself with the best people you can find, delegate authority, and don't interfere as long as the policy you've decided upon is being carried out.

The best minds are not in government. If any were, business would steal them away.

The government's view of the economy could be summed up in a few short phrases: If it moves, tax it. If it keeps moving, regulate it. And if it stops moving, subsidize it.

The greatest security for Israel is to create new Egypts.

The most terrifying words in the English language are: I'm from the government and I'm here to help.

The nine most terrifying words in the English language are, 'I'm from the government and I'm here to help.'

The taxpayer - that's someone who works for the federal government but doesn't have to take the civil service examination.

The ultimate determinant in the struggle now going on for the world will not be bombs and rockets but a test of wills and ideas-a trial of spiritual resolve: the values we hold, the beliefs we cherish and the ideals to which we are dedicated.

There are no constraints on the human mind, no walls around the human spirit, no barriers to our progress except those we ourselves erect.

There are no easy answers' but there are simple answers. We must have the courage to do what we know is morally right.

There are no great limits to growth because there are no limits of human intelligence, imagination, and wonder.

They say the world has become too complex for simple answers. They are wrong.

To sit back hoping that someday, some way, someone will make things right is to go on feeding the crocodile, hoping he will eat you last - but eat you he will.

Unemployment insurance is a pre-paid vacation for freeloaders.

We can not play innocents abroad in a world that is not innocent.

We might come closer to balancing the Budget if all of us lived closer to the Commandments and the Golden Rule.

We must reject the idea that every time a law's broken, society is guilty rather than the lawbreaker. It is time to restore the American precept that each individual is accountable for his actions.

We should declare war on North Vietnam. We could pave the whole country and put parking strips on it, and still be home by Christmas.

We should measure welfare's success by how many people leave welfare, not by how many are added.

We're in greater danger today than we were the day after Pearl Harbor. Our military is absolutely incapable of defending this country.

What we have found in this country, and maybe we're more aware of it now, is one problem that we've had, even in the best of times, and that is the people who are sleeping on the grates, the homeless, you might say, by choice.

When you can't make them see the light, make them feel the heat.

You know, if I listened to Michael Dukakis long enough, I would be convinced we're in an economic downturn and people are homeless and going without food and medical attention and that we've got to do something about the unemployed.

From Ronald Reagan Quotes to Quote of the Day