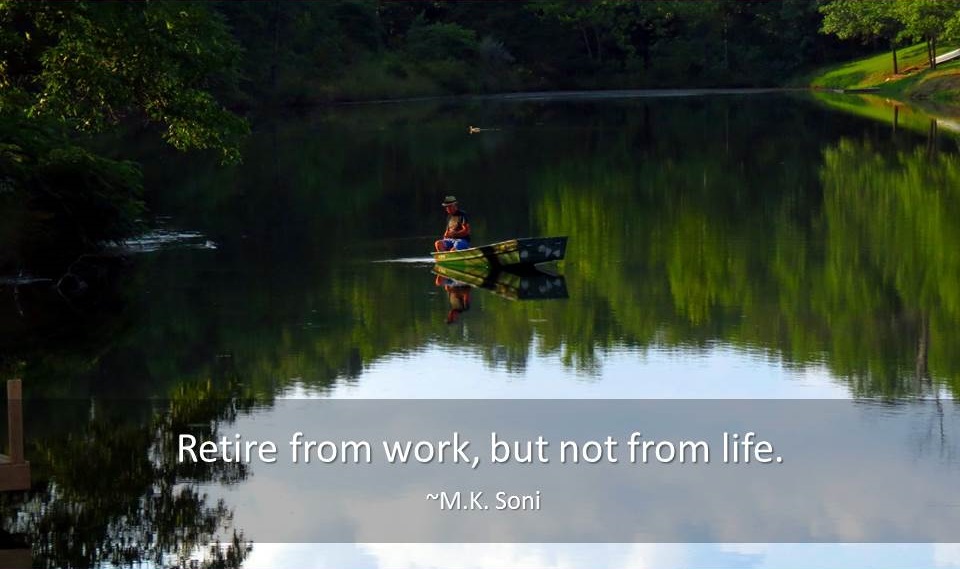 Welcome to Retirement Quotes. Here you will find famous quotes and quotations about Retirement.

Retire from work, but not from life. ~M.K. Soni

If you drink, don't drive. Don't even putt. ~Dean Martin

God's retirement plan is out of this world.~Source Unknown

Retirement without the love of letters is a living burial. ~Seneca

Retirement is the ugliest word in the language. ~Ernest Hemingway

Don't play too much golf. Two rounds a day are plenty. ~Harry Vardon

The trouble with retirement is that you never get a day off. ~Abe Lemons

Golf is a day spent in a round of strenuous idleness. ~William Wordsworth

I'm now as free as the breeze - with roughly the same income. ~Gene Perret

Youth would be an ideal state if it came a little later in life. ~Herbert Asquith

You are only young once, but you can stay immature indefinitely. ~Ogden Nash

The question isn't at what age I want to retire, it's at what income. ~George Foreman

Middle age is when work is a lot less fun and fun is a lot more work. ~Author Unknown

There are some who start their retirement long before they stop working. ~Robert Half

Don't simply retire from something; have something to retire to. ~Harry Emerson Fosdick

Retirement means no pressure, no stress, no heartache... unless you play golf. ~Gene Perret

The challenge of retirement is how to spend time without spending money. ~Author Unknown

There's never enough time to do all the nothing you want. ~Bill Watterson, Calvin and Hobbes

The best time to start thinking about your retirement is before the boss does.~Source Unknown

I've been attending lots of seminars in my retirement. They're called naps. ~Merri Brownworth

Retirement at sixty-five is ridiculous. When I was sixty-five I still had pimples. ~George Burns

When a man retires, his wife gets twice the husband but only half the income. ~Chi Chi Rodriguez

I enjoy waking up and not having to go to work. So I do it three or four times a day. ~Gene Perret

The reason the pro tells you to keep your head down is so you can't see him laughing. ~Phyllis Diller

Retirement is wonderful. It's doing nothing without worrying about getting caught at it. ~Gene Perret

When men reach their sixties and retire, they go to pieces. Women go right on cooking. ~Gail Sheehy

When you retire, you switch bosses - from the one who hired you to the one who married you. ~Gene Perret

Golf is played by twenty million mature American men whose wives think they are out having fun. ~Jim Bishop

Retirement: It's nice to get out of the rat race, but you have to learn to get along with less cheese. ~Gene Perret

Retirement is having nothing to do and someone always keeping you from it. ~Robert Brault, www.robertbrault.com

If people concentrated on the really important things in life, there'd be a shortage of fishing poles. ~Doug Larson

Sometimes it's hard to tell if retirement is a reward for a lifetime of hard work or a punishment. ~Terri Guillemets

Age is only a number, a cipher for the records. A man can't retire his experience. He must use it. ~Bernard Baruch

There must be quite a few things that a hot bath won't cure, but I don't know many of them. ~Sylvia Plath, The Bell Jar

There are days in retirement that are the waking equivalent of a dreamless sleep, if you know what I mean. ~Robert Brault

In my retirement I go for a short swim at least once or twice every day. It's either that or buy a new golf ball. ~Gene Perret

When a man retires and time is no longer a matter of urgent importance, his colleagues generally present him with a watch. ~R.C. Sherriff

Retirement is like a long vacation in Las Vegas. The goal is to enjoy it the fullest, but not so fully that you run out of money. ~Jonathan Clements

Half our life is spent trying to find something to do with the time we have rushed through life trying to save. ~Will Rogers, Autobiography, 1949

I try to treat each evening and weekend as little slices of retirement because no one is guaranteed a lengthy one at the end of their career. ~Mike Hammar

A gold watch is the most appropriate gift for retirement, as its recipients have given up so many of their golden hours in a lifetime of service. ~Harry Mahtar

If you are going to throw a club, it is important to throw it ahead of you, down the fairway, so you don't have to waste energy going back to pick it up. ~Tommy Bolt

Preparation for old age should begin not later than one's teens. A life which is empty of purpose until 65 will not suddenly become filled on retirement.~Arthur E. Morgan

Don't underestimate the value of Doing Nothing, of just going along, listening to all the things you can't hear, and not bothering. ~Pooh's Little Instruction Book, inspired by A.A. Milne

Rest is not idleness, and to lie sometimes on the grass under trees on a summer's day, listening to the murmur of the water, or watching the clouds float across the sky, is by no means a waste of time. ~J. Lubbock

Retirement has been a discovery of beauty for me. I never had the time before to notice the beauty of my grandkids, my wife, the tree outside my very own front door. And, the beauty of time itself. ~Hartman Jule

Sometimes it's important to work for that pot of gold. But other times it's essential to take time off and to make sure that your most important decision in the day simply consists of choosing which color to slide down on the rainbow. ~Douglas Pagels

From Retirement Quotes to Quote of the Day