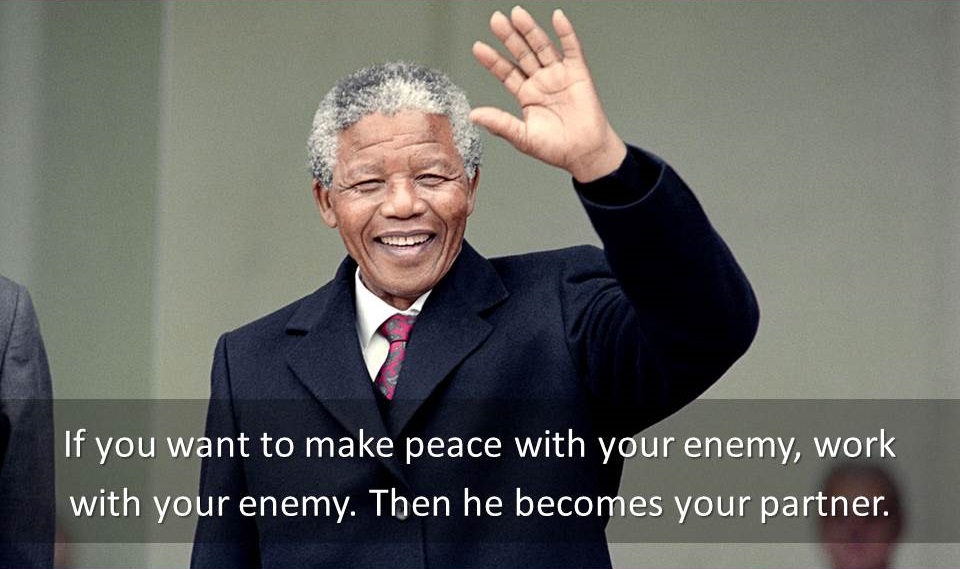 I am the captain of my soul.

Where you stand depends on where you sit.

A winner is a dreamer who never gives up.

There is no such thing as part freedom.

Appearances matter — and remember to smile.

It always seems impossible until it's done.

Let there be work, bread, water and salt for all.

Life is a course with endless obstacles to hurdle.

Education is the most powerful weapon which you can use to change the world.

Courage is not the absence of fear — it´s inspiring others to move beyond it.

In my country we go to prison first and then become President.

Keep your friends close — and your rivals even closer.

Know your enemy — and learn about his favorite sport.

Freedom would be meaningless without security in the home and in the streets.

I am not a saint, unless you think of a saint as a sinner who keeps on trying.

After climbing a great hill, one only finds that there are many more hills to climb.

It is not where you start but how high you aim that matters for success.

Let freedom reign. The sun never set on so glorious a human achievement.

An ode to the fact that racism is not passed on genetically, but passed on through teachings.

As we let our own light shine, we unconsciously give other people permission to do the same.

Nothing is black or white.

Quitting is leading too.

Money won't create success, the freedom to make it will.

Man's goodness is a flame that can be hidden but never extinguished.

One cannot be prepared for something while secretly believing it will not happen.

Do not judge me by my successes, judge me by how many times I fell down and got back up again.

From the poorest of countries to the richest of nations, education is the key to moving forward in any society.

I cannot conceive of Israel withdrawing if Arab states do not recognize Israel, within secure borders.

I detest racialism, because I regard it as a barbaric thing, whether it comes from a black man or a white man.

When the water starts boiling it is foolish to turn off the heat.

Resentment is like drinking poison and then hoping it will kill your enemies.

Sometimes it falls upon a generation to be great, you can be that generation.

The brave man is not he who does not feel afraid, but he who conquers that fear.

Living isn’t just about doing for yourself, but what you do for others as well.

There can be no keener revelation of a society's soul than the way in which it treats its children.

One of the things I learned when I was negotiating was that until I changed myself, I could not change others.

Only free men can negotiate; prisoners cannot enter into contracts. Your freedom and mine cannot be separated.

There is no passion to be found playing small - in settling for a life that is less than the one you are capable of living.

The greatest glory in living lies not in never falling, but in rising every time we fall.

There is nothing like returning to a place that remains unchanged to find the ways in which you yourself have altered.

We must use time wisely and forever realize that the time is always ripe to do right.

When a man is denied the right to live the life he believes in, he has no choice but to become an outlaw.

For to be free is not merely to cast off one's chains, but to live in a way that respects and enhances the freedom of others.

There was no particular day on which I said, Henceforth I will devote myself to the liberation of my people; instead, I simply found myself doing so, and could not do otherwise.

A good head and good heart are always a formidable combination. But when you add to that a literate tongue or pen, then you have something very special.

I am fundamentally an optimist. Whether that comes from nature or nurture, I cannot say. Part of being optimistic is keeping one's head pointed toward the sun, one's feet moving forward.

As I have said, the first thing is to be honest with yourself. You can never have an impact on society if you have not changed yourself... Great peacemakers are all people of integrity, of honesty, but humility.

As I walked out the door toward the gate that would lead to my freedom, I knew if I didn't leave my bitterness and hatred behind, I'd still be in prison.

I had no epiphany, no singular revelation, no moment of truth, but a steady accumulation of a thousand slights, a thousand indignities and a thousand unremembered moments produced in me an anger, a rebelliousness, a desire to fight the system that imprisoned my people.

I learned that courage was not the absence of fear, but the triumph over it. The brave man is not he who does not feel afraid, but he who conquers that fear.

Overcoming poverty is not a task of charity; it is an act of justice. Like Slavery and Apartheid, poverty is not natural. It is man-made and it can be overcome and eradicated by the actions of human beings. Sometimes it falls on a generation to be great. YOU can be that great generation. Let your greatness blossom.

No one is born hating another person because of the color of his skin, or his background, or his religion. People must learn to hate, and if they can learn to hate, they can be taught to love, for love comes more naturally to the human heart than its opposite.

We are too quick to give up and refuse to get up from our failures. If we don’t fight to get up, we are giving up on something bigger — life.

It is said that no one truly knows a nation until one has been inside its jails. A nation should not be judged by how it treats its highest citizens, but its lowest ones.

From Nelson Mandela Quotes to Quote of the Day