Welcome to Funny Quotes about Brothers. Here you will find Funny Brothers Quotes. 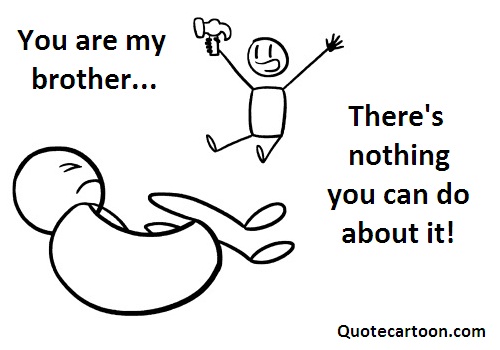 Ron was always my favorite character, because I feel like I relate to him, like we've both got red hair, we both like sweets, we've both got lots of brothers and sisters. ~Rupert Grint

Siblings are the people we practice on, the people who teach us about fairness and cooperation and kindness and caring - quite often the hard way. ~Pamela Dugdale

Sometimes being a brother is even better than being a superhero. ~Marc Brown

The Bee Gees, to us, was the three brothers. In Maurice's name, we would respect that and not be the Bee Gees anymore. ~Robin Gibb

The best thing about having four big brothers is you always have someone to do something for you. ~Chloe Moretz

The best way to get a puppy is to beg for a baby brother - and they'll settle for a puppy every time. ~Winston Pendelton

The first Monopoly game I played with my brothers, I hated losing so much, I just had to beat them. ~Drew Carey

The highlight of my childhood was making my brother laugh so hard that food came out his nose. ~Garrison Keillor

The illness, and the untimely death of my brothers, has made me conscious of the fact that - rather than just think about it - it's crucial that you do today what you want to do. ~Robin Gibb

The mildest, drowsiest sister has been known to turn tiger if her sibling is in trouble. ~Clara Ortega

The Wright brothers flew right through the smoke screen of impossibility. ~Charles Kettering

The younger brother must help to pay for the pleasures of the elder. ~Jane Austen

There is a destiny which makes us brothers; none goes his way alone. All that we send into the lives of others comes back into our own. ~Edwin Markham

There were times when I had great times with my brothers, pillow fights and things, but I was, used to always cry from loneliness. ~Michael Jackson

There's only one race - it's human. We are all brothers and sisters. ~Jack Kemp

Together with the Works of Mercy, feeding, clothing and sheltering our brothers, we must indoctrinate. ~Dorothy Day

From Funny Quotes about Brothers to Random Quotes