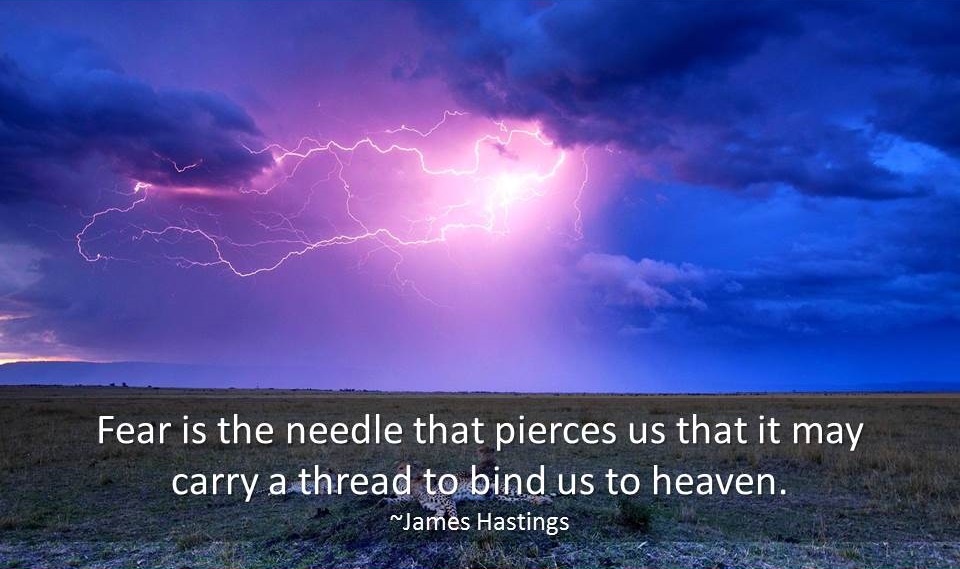 Welcome to Fear Quotes. Here you will find famous quotes and fear quotations.

A cat bitten once by a snake dreads even rope. ~Arab Proverb

All religion, my friend, is simply evolved out of fraud, fear, greed, imagination, and poetry. ~Edgar Allan Poe

Anything I've ever done that ultimately was worthwhile... initially scared me to death. ~Betty Bender

As soon as the fear approaches near, attack and destroy it. ~Chanakya

Courage is a mean with regard to fear and confidence. ~Aristotle

Courage is knowing what not to fear. ~Plato

Courage is resistance to fear, mastery of fear, not absence of fear. ~Mark Twain

Decide that you want it more than you are afraid of it. ~Bill Cosby

Do not fear death so much but rather the inadequate life. ~Bertolt Brecht

Do not fear mistakes. You will know failure. Continue to reach out. ~Benjamin Franklin

Do the thing we fear, and death of fear is certain. ~Ralph Waldo Emerson

Do the thing you fear most and the death of fear is certain. ~Mark Twain

Do the thing you fear to do and keep on doing it... that is the quickest and surest way ever yet discovered to conquer fear. ~Dale Carnegie

Don't let the fear of striking out hold you back. ~Babe Ruth

Every man, through fear, mugs his aspirations a dozen times a day. ~Brendan Francis

Expose yourself to your deepest fear; after that, fear has no power, and the fear of freedom shrinks and vanishes. You are free. ~Jim Morrison

Fear can be headier than whiskey, once man has acquired a taste for it. ~Donald Dowes

Fear cannot be without hope nor hope without fear. ~Baruch Spinoza

Fear cannot take what you do not give it. ~Christopher Coan

Fear defeats more people than any other one thing in the world. ~Ralph Waldo Emerson

Fear doesn't exist anywhere except in the mind. ~Dale Carnegie

Fear has a large shadow, but he himself is small. ~Ruth Gendler

Fear has its use but cowardice has none. ~Mahatma Gandhi

Fear is a darkroom where negatives develop. ~Usman B. Asif

Fear is a slinking cat I find beneath the lilacs of my mind. ~Sophie Tunnell

Fear is faith that it won't work out. ~Sister Mary Tricky

Fear is pain arising from the anticipation of evil. ~Aristotle

Fear is static that prevents me from hearing myself. ~Samuel Butler

Fear is the cheapest room in the house. I would like to see you living in better conditions. ~Hafez

Fear is the father of courage and the mother of safety. ~Henry H. Tweedy

Fear is the lengthened shadow of ignorance. ~Arnold Glasow

Fear is the mother of morality. ~Friedrich Nietzsche

Fear is the needle that pierces us that it may carry a thread to bind us to heaven. ~James Hastings

Fear makes strangers of people who would be friends. ~Shirley Maclaine

Fear makes strangers of people who would be friends. ~Shirley MacLaine

Fear makes the wolf bigger than he is. ~German Proverb

Fear of death increases in exact proportion to increase in wealth. ~Ernest Hemingway

Fear of death makes us devoid both of valour and religion. For want of valour is want of religious faith. ~Mahatma Gandhi

Fear of something is at the root of hate for others, and hate within will eventually destroy the hater. ~George Washington Carver

Fear? If I have gained anything by damning myself, it is that I no longer have anything to fear. ~Jean-Paul Sartre

Feed your faith and your fears will starve to death. ~Author Unknown

Fools rush in where angels fear to tread. ~Alexander Pope

Have no fear of perfection - you'll never reach it. ~Salvador Dali

He has not learned the lesson of life who does not every day surmount a fear. ~Ralph Waldo Emerson

He who fears something gives it power over him. ~Moorish Proverb

He who fears to suffer, suffers from fear. ~French Proverb

He who is not everyday conquering some fear has not learned the secret of life. ~Ralph Waldo Emerson

Healthy children will not fear life if their elders have integrity enough not to fear death. ~Erik H. Erikson

I believe that every single event in life happens in an opportunity to choose love over fear. ~Oprah Winfrey

I do not fear computers. I fear the lack of them. ~Isaac Asimov

I don't have no fear of death. My only fear is coming back reincarnated. ~Tupac Shakur

I expect nothing. I fear no one. I am free. ~Nikos Kazantzakis

I have learned over the years that when one's mind is made up, this diminishes fear. ~Rosa Parks

I have no fear that the result of our experiment will be that men may be trusted to govern themselves without a master. ~Thomas Jefferson

If people are good only because they fear punishment, and hope for reward, then we are a sorry lot indeed. ~Albert Einstein

If you know the enemy and know yourself you need not fear the results of a hundred battles. ~Sun Tzu

If you want to conquer fear, don't sit home and think about it. Go out and get busy. ~Dale Carnegie

In order to succeed, your desire for success should be greater than your fear of failure. ~Bill Cosby

In time we hate that which we often fear. ~William Shakespeare

It is not death that a man should fear, but he should fear never beginning to live. ~Marcus Aurelius

It was the experience of mystery - even if mixed with fear - that engendered religion. ~Albert Einstein

It's the most unhappy people who most fear change. ~Mignon McLaughlin

Keep your fears to yourself but share your courage with others. ~Robert Louis Stevenson

Listen to the little voice of doubt only if it has something insightful or smart to say, not if it's just spouting fear. ~Terri Guillemets

Many of our fears are tissue-paper-thin, and a single courageous step would carry us clear through them. ~Brendan Francis

Men are moved by two levers only: fear and self interest. ~Napoleon Bonaparte

My only fear is that I may live too long. This would be a subject of dread to me. ~Thomas Jefferson

Never let the fear of striking out get in your way. ~Babe Ruth

No one ever told me that grief felt so like fear. ~C. S. Lewis

Nothing in life is to be feared. It is only to be understood. ~Marie Curie

Nothing is more despicable than respect based on fear. ~Albert Camus

Our party must continue to strike fear in the heart of the white man, our real enemy! ~Robert Mugabe

Panic at the thought of doing a thing is a challenge to do it. ~Henry S. Haskins

People living deeply have no fear of death. ~Anais Nin

The beauty, the poetry of the fear in their eyes. I didn't mind going to jail for, what, five, six hours? It was absolutely worth it. ~Johnny Depp

The cave you fear to enter holds the treasure you seek. ~Joseph Campbell

The day which we fear as our last is but the birthday of eternity. ~Lucius Annaeus Seneca

The fear of death follows from the fear of life. A man who lives fully is prepared to die at any time. ~Mark Twain

The fear of death is the most unjustified of all fears, for there's no risk of accident for someone who's dead. ~Albert Einstein

The only thing we have to fear is fear itself. ~Franklin D. Roosevelt

The safest course is to do nothing against one's conscience. With this secret, we can enjoy life and have no fear from death. ~Voltaire

The thing you fear most has no power. Your fear of it is what has the power. Facing the truth really will set you free. ~Oprah Winfrey

The way you overcome shyness is to become so wrapped up in something that you forget to be afraid. ~Lady Bird Johnson

The wise man in the storm prays God, not for safety from danger, but for deliverance from fear. ~Ralph Waldo Emerson

There are several good protections against temptation, but the surest is cowardice. ~Mark Twain

There are times when fear is good. It must keep its watchful place at the heart's controls. ~Aeschylus

There are very few monsters who warrant the fear we have of them. ~Andre Gide

There is not a truth existing which I fear... or would wish unknown to the whole world. ~Thomas Jefferson

Things done well and with a care, exempt themselves from fear. ~William Shakespeare

Those that walk with fear will always be too busy hiding. ~Mike Dolan

To conquer fear is the beginning of wisdom. ~Bertrand Russell

To fear is one thing. To let fear grab you by the tail and swing you around is another. ~Katherine Paterson

To fear love is to fear life, and those who fear life are already three parts dead. ~Bertrand Russell

To lead is difficult when you're a follower of fear. ~T.A. Sachs

We are afraid to care too much, for fear that the other person does not care at all. ~Eleanor Roosevelt

We must build dikes of courage to hold back the flood of fear. ~Martin Luther King, Jr.

You are the one giving fear a leg to stand on. ~Dodinsky

You block your dream when you allow your fear to grow bigger than your faith. ~Mary Manin Morrissey

From Fear Quotes to Quote of the Day