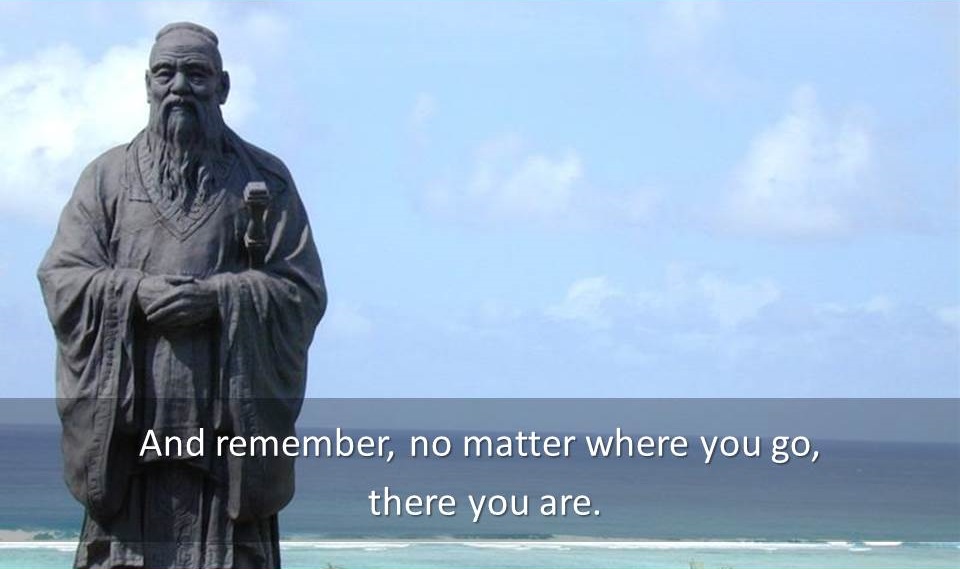 Welcome to Confucius Quotes. Here you will find famous quotes & quotations by Confucius.

A superior man is modest in his speech, but exceeds in his actions.

Ability will never catch up with the demand for it.

An oppressive government is more to be feared than a tiger.

And remember, no matter where you go, there you are.

Be not ashamed of mistakes and thus make them crimes.

Before you embark on a journey of revenge, dig two graves.

Better a diamond with a flaw than a pebble without.

By nature, men are nearly alike; by practice, they get to be wide apart.

By three methods we may learn wisdom: First, by reflection, which is noblest; Second, by imitation, which is easiest; and third by experience, which is the bitterest.

Choose a job you love, and you will never have to work a day in your life.

Death and life have their determined appointments; riches and honors depend upon heaven.

Do not impose on others what you yourself do not desire.

Everything has beauty, but not everyone sees it.

Faced with what is right, to leave it undone shows a lack of courage.

Fine words and an insinuating appearance are seldom associated with true virtue.

Go before the people with your example, and be laborious in their affairs.

Have no friends not equal to yourself.

He who exercises government by means of his virtue may be compared to the north polar star, which keeps its place and all the stars turn towards it.

He who speaks without modesty will find it difficult to make his words good.

He who will not economize will have to agonize.

He with whom neither slander that gradually soaks into the mind, nor statements that startle like a wound in the flesh, are successful may be called intelligent indeed.

Heaven means to be one with God.

I am not one who was born in the possession of knowledge; I am one who is fond of antiquity, and earnest in seeking it there.

I want you to be everything that's you, deep at the center of your being.

If a man takes no thought about what is distant, he will find sorrow near at hand.

If I am walking with two other men, each of them will serve as my teacher. I will pick out the good points of the one and imitate them, and the bad points of the other and correct them in myself.

If we don't know life, how can we know death?

Ignorance is the night of the mind, but a night without moon and star.

Is virtue a thing remote? I wish to be virtuous, and lo! Virtue is at hand.

It does not matter how slowly you go as long as you do not stop.

It is more shameful to distrust our friends than to be deceived by them.

Learning without thought is labor lost; thought without learning is perilous.

Life is really simple, but we insist on making it complicated.

Look at the means which a man employs, consider his motives, observe his pleasures. A man simply cannot conceal himself!

Men's natures are alike, it is their habits that carry them far apart.

Never contract friendship with a man that is not better than thyself.

Never give a sword to a man who can't dance.

Old age, believe me, is a good and pleasant thing. It is true you are gently shouldered off the stage, but then you are given such a comfortable front stall as spectator.

Only the wisest and stupidest of men never change.

Our greatest glory is not in never falling, but in getting up every time we do.

Recompense injury with justice, and recompense kindness with kindness.

Respect yourself and others will respect you.

Silence is a true friend who never betrays.

Speak the truth, do not yield to anger; give, if thou art asked for little; by these three steps thou wilt go near the gods.

Study the past, if you would define the future.

Success depends upon previous preparation, and without such preparation there is sure to be failure.

The book salesman should be honored because he brings to our attention, as a rule, the very books we need most and neglect most.

The determined scholar and the man of virtue will not seek to live at the expense of injuring their virtue. They will even sacrifice their lives to preserve their virtue complete.

The expectations of life depend upon diligence; the mechanic that would perfect his work must first sharpen his tools.

The faults of a superior person are like the sun and moon. They have their faults, and everyone sees them; they change and everyone looks up to them.

The firm, the enduring, the simple, and the modest are near to virtue.

The man of virtue makes the difficulty to be overcome his first business, and success only a subsequent consideration.

The man who in view of gain thinks of righteousness; who in the view of danger is prepared to give up his life; and who does not forget an old agreement however far back it extends - such a man may be reckoned a complete man.

The more man meditates upon good thoughts, the better will be his world and the world at large.

The object of the superior man is truth.

The people may be made to follow a path of action, but they may not be made to understand it.

From Confucius Quotes to Brother Quotes