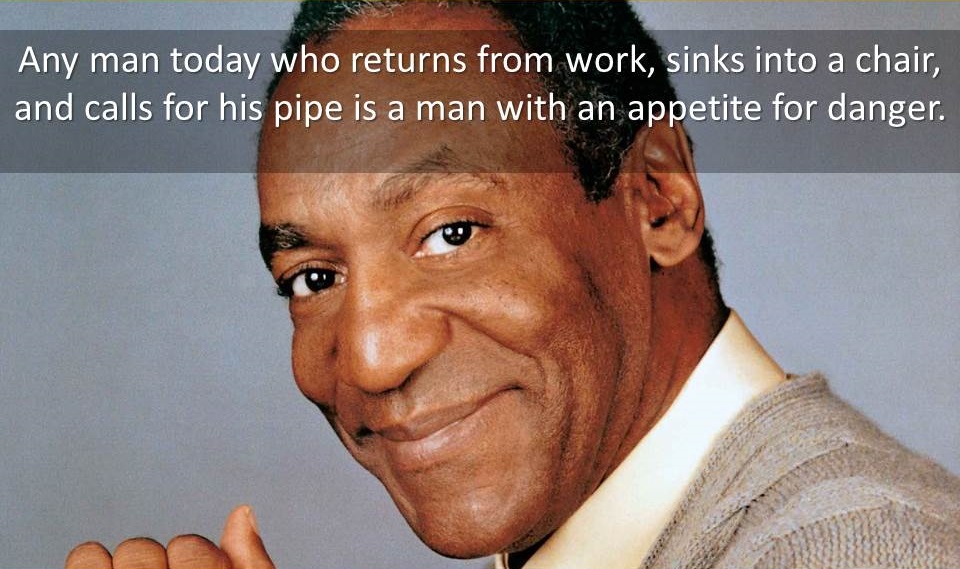 Welcome to Bill Cosby Quotes. Here you will find famous quotes and quotations by Bill Cosby.

Any man today who returns from work, sinks into a chair, and calls for his pipe is a man with an appetite for danger.

As I have discovered by examining my past, I started out as a child. Coincidentally, so did my brother. My mother did not put all her eggs in one basket, so to speak: she gave me a younger brother named Russell, who taught me what was meant by "survival of the fittest."

Civilization had too many rules for me, so I did my best to rewrite them.

Decide that you want it more than you are afraid of it.

Even though your kids will consistently do the exact opposite of what you're telling them to do, you have to keep loving them just as much.

Fatherhood is pretending the present you love most is soap-on-a-rope.

Having a child is surely the most beautifully irrational act that two people in love can commit.

Human beings are the only creatures on earth that allow their children to come back home.

I am certainly not an authority on love because there are no authorities on love, just those who've had luck with it and those who haven't.

I am proud to be an American. Because an American can eat anything on the face of this earth as long as he has two pieces of bread.

I don't know the key to success, but the key to failure is trying to please everybody.

I guess the real reason that my wife and I had children is the same reason that Napoleon had for invading Russia: it seemed like a good idea at the time.

I sat at a Blackjack table and I swear this guy ran off eleven hands straight. And this lady and I sitting at the table finally we just said look... Don't give us any more cards you just call out what you have and we'll throw you the money.... more

I wasn't always black... there was this freckle, and it got bigger and bigger.

If the new American father feels bewildered and even defeated, let him take comfort from the fact that whatever he does in any fathering situation has a fifty percent chance of being right.

Immortality is a long shot, I admit. But somebody has to be first.

In order to succeed, your desire for success should be greater than your fear of failure.

It isn't a matter of black is beautiful as much as it is white is not all that's beautiful.

Let us now set forth one of the fundamental truths about marriage: the wife is in charge.

Like everyone else who makes the mistake of getting older, I begin each day with coffee and obituaries.

Men and women belong to different species and communications between them is still in its infancy.

My childhood should have taught me lessons for my own fatherhood, but it didn't because parenting can only be learned by people who have no children.

No matter how calmly you try to referee, parenting will eventually produce bizarre behavior, and I'm not talking about the kids. Their behavior is always normal.

Nothing I've ever done has given me more joys and rewards than being a father to my children.

Nothing separates the generations more than music. By the time a child is eight or nine, he has developed a passion for his own music that is even stronger than his passions for procrastination and weird clothes.

People can be more forgiving than you can imagine. But you have to forgive yourself. Let go of what's bitter and move on.

Poets have said that the reason to have children is to give yourself immortality. Immortality? Now that I have five children, my only hope is that they are all out of the house before I die.

Raising children is an incredibly hard and risky business in which no cumulative wisdom is gained: each generation repeats the mistakes the previous one made.

Sex education may be a good idea in the schools, but I don't believe the kids should be given homework.

That married couples can live together day after day is a miracle that the Vatican has overlooked.

The essence of childhood, of course, is play, which my friends and I did endlessly on streets that we reluctantly shared with traffic.

The heart of marriage is memories; and if the two of you happen to have the same ones and can savor your reruns, then your marriage is a gift from the gods.

The main goal of the future is to stop violence. The world is addicted to it.

The past is a ghost, the future a dream, and all we ever have is now.

The people in this hotel are very nice, everybody here is. They gave me a suite here, big time suite, weird though... They got a mirror over my bed. No I swear there a big mirror over my bed! I was un-easy going to bed I had a feeling the pit... more

The truth is that parents are not really interested in justice. They just want quiet.

There is hope for the future because God has a sense of humor and we are funny to God.

There is no labor a person does that is undignified; if they do it right.

Through humor, you can soften some of the worst blows that life delivers. And once you find laughter, no matter how painful your situation might be, you can survive it.

When you become senile, you won't know it.

You can turn painful situations around through laughter. If you can find humor in anything, even poverty, you can survive it.

You know the only people who are always sure about the proper way to raise children? Those who've never had any.